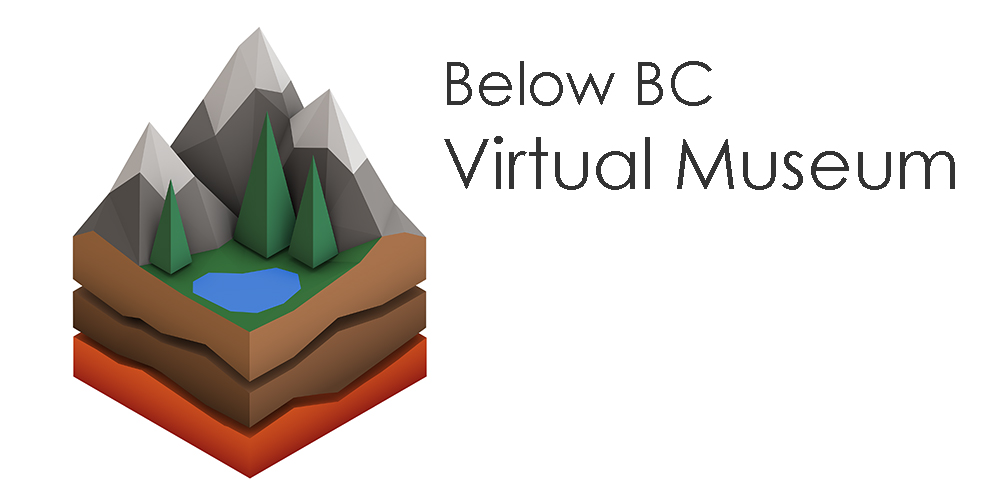 
Pyrrhotite is an iron sulphide mineral that is bronze to dark black in colour. Due to much more cost-efficient sources of iron such as iron stone, it is not mined unless it includes some of a more valuable commodity such as gold or silver. One very interesting property of pyrrhotite is that it is variably magnetic. This property is based on having iron in the overall mixture of elements in the mineral. Varieties of pyrrhotite with less iron are more magnetic. Pyrrhotite is often found as a constituent in mafic rocks of igneous composition, and in that case, it is associated with a more valuable mineral called pentlandite.

19-KUR06 to 19-KUR09 shows core decomposing from pyrrhotite, to pyrite, to limonite

In 1825, a botanist discovered sulphide ore at the Bluebell site. In later years, Hudson Bay Company trappers used galena from this site to make bullets. The site was staked by R.E. Sproule in 1882. The Bluebell occurrence consists of three main zones approximately 500 metres apart along strike of the Lower Cambrian Badshot Formation marble. The Comfort zone (082FNE044) occurs at the north end of Riondel Peninsula, the Bluebell zone in the centre, and the Kootenay Chief (082FNE042) at the south end. The zones are localized along steep cross-fractures that trend west-northwesterly and dip 80 to 90 degrees north. Within the zones are tabular ore shoots that are transverse to the bedding and plunge westward following the intersection of the fractures with the marbles. The ore occurs as replacement deposits along steep cross fractures in the marbles. Bedding planes and minor structures tend to localize the deposit. The ore consists of galena, sphalerite, pyrrhotite, pyrite, arsenopyrite, and chalcopyrite. The gangue occurring with the sulphides consists of carbonates, coarsely-grained quartz and knebelite. Oxidation of the deposit has occurred to depths well below lake level.

The large surface showing was known to early fur traders and was brought to the attention of mining capital as early as 1865. The first claims were located in 1852 and development work was begun two years later. By 1891 about 70 claims had been staked in the surrounding area. From 1888 to 1896 the mine was operated by the Kootenay Mining & Smelting Co. Ltd.

In 1906 the property was taken over by the Canadian Metal Co. Ltd. Due to financial difficulties the company was reorganized in 1911 under the name of the New Canadian Metal Co. They worked the property intermittently for about 20 years. There are three known centres of mineralization in the mine, spaced at approximately 457 metre intervals along the strike of the limestone. These three ore zones are known from north to south as the Comfort, the Bluebell, and the Kootenay Chief. At the time the mine closed an inclined shaft had been sunk on the Comfort ore zone and an adit driven on the Kootenay Chief claim.

The Consolidated Mining and Smelting Company of Canada Ltd. acquired the property in 1931 and did some exploration work on the Bluebell, Comfort and Kootenay Chief claims, however the mine was not reopened. Further diamond drilling was done in 1942 but the results were not encouraging. In 1947 diamond drilling was done along about 1524 metres of limestone outcrop and the three orebodies mentioned above were outlined. The mine was reopened the following year.

Since 1947 an inclined shaft, located between the Bluebell and Kootenay Chief ore zones, has been sunk for 572 metres to a vertical depth of 247 metres. Development work has been carried out on all levels from 69 to 267 metres. A large volume of water enters the lower workings of the mine.

The mine closed in December 1971 due to depletion of the Ore reserves.

Approximately 500,000 tons of mill tailings containing zinc, lead and silver were dumped on the shore of Kootenay Lake in the early 1900s. Most of this material eventually slid to the bottom of the lake, 128 metres deep and 290 metres offshore. (Mining Magazine, December 1983, p. 446)